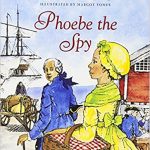 “Someone is planning to kill George Washington, and young Phoebe Fraunces is trying to save his life. Phoebe gets a job as George Washington’s housekeeper, but her real job is to work as a spy. She listens and watches very carefully, and she meets her father every day to tell him what she has learned. One day Phoebe’s father tells her that Washington is planning to leave town in a few days, and the person plotting against him will act before then. Phoebe is very frightened, but she is determined to figure out who is after Washington before it’s too late. . . .” -Goodreads