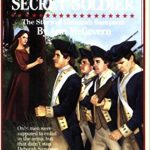 The Secret Soldier: The Story of Deborah Sampson by Ann McGovern

“Deborah Sampson wanted to travel and have adventures, but since she had no money, the best way to do that was to join the army. This is the exciting true story of a woman who became a soldier during the American Revolutionary War, by dressing and acting like a man.” -Goodreads