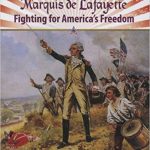 “The Marquis de Lafayette was a young aristocrat from France who played a key role in the success of the American Revolution. From a wealthy family with a military history, he admired the struggle for independence in the American colonies and crossed the Atlantic Ocean to fight on the side of the colonists. Readers will learn how he became a longtime friend of the future president, George Washington, and how his skills both on the battlefield and in persuading the government of France to support the American colonists, earned him a lasting legacy in the history of the United States.” -Goodreads