Answering the Cry for Freedom: Stories of African Americans and the American Revolution
by Gretchen Woelfle 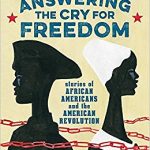