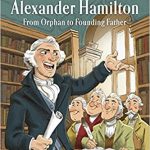 Alexander Hamilton: From Orphan to Founding Father by Monica Kulling

“Did you know that one of our Founding Fathers was not born in America? An orphan from the West Indies, Alexander Hamilton came to the colonies and played an important role in the Revolutionary War, rising to become General George Washington’s right-hand man. But his accomplishments don’t stop there! He helped obtain the ratification of the Constitution; he was America’s first secretary of the treasury; and he established the first national bank and the U.S. Mint. A man of ambition, loyalty, and principle, he is now being celebrated as the prominent patriot he was.” -Goodreads