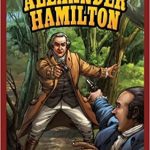 “America’s independence and democratic government was brought about due to the hard work of some remarkable men, now called our Founding Fathers. Alexander Hamilton is one of these remarkable men. His story and important contributions to America are perhaps even more amazing when one considers his origins as a poor child born on an island in the Caribbean who had no formal education. His natural smarts, talent, and ambition brought him into contact with the leaders of Americas rebellion against Britain. He became a friend and important adviser to George Washington and was the first Secretary of the Treasury. He created the first national bank, founded the U.S. Mint, and followed with many more great achievements before dying a tragic death in a duel with rival Aaron Burr. Readers at all levels will be intrigued by the graphic-style presentation of Hamilton’s life and find this a fascinating biographical volume.” -Goodreads