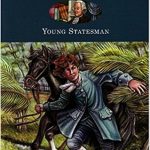 “The adult accomplishments of this Founding Father, architect of the Constitution and first Secretary of the Treasury, are legendary, and in this latest offering, children meet the young “Alec” growing up in the Caribbean as he dreams of visiting the land called America. Accompanied by his parrot, Hurry-Up, and his companion, Poleon, Alec’s tranquil days are filled with the books he loves and visits to the waterfront to greet the large ships arriving from Europe—until his uncle insists that Alec fit riding lessons into his schedule. Children will identify with Alec’s struggle to overcome his fear of horses and cheer at his courage as he narrowly escapes a violent hurricane while on horseback, all while keeping his eye on the prize—school in America. Featured sections and fun facts explain what happened next and when Alexander Hamilton lived, providing young readers with a snapshot of the leader’s entire life.” -Goodreads