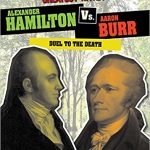 “Alexander Hamilton and Aaron Burr came from differing backgrounds, but rose to great stature in the years following the American Revolution. As Secretary to the Treasury, Hamilton tackled the fragile finances of the new nation. Burr became the third US vice president in 1800. Readers may wonder how two such prominent men wound up in a duel that ultimately took Hamilton’s life and ended Burr’s political career. This is the engrossing account of the incidents that led to that fateful morning in 1804. Background information of the era, a timeline, quotes, and historical paintings enhance readers’ understanding of the post-revolutionary country.” -Goodreads