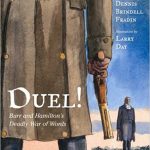 “In the early morning hours of July 11, 1804, two men stood facing each other on a New Jersey cliff side. One was the U.S. vice president, Aaron Burr, and the other was Alexander Hamilton, the secretary of the treasury. They were ready to fight to the death for honor. These Founding Fathers, once friends and colleagues, had become the bitterest of enemies. After years of escalating tension, Burr had finally challenged Hamilton to a duel. In the end, only one man survived, but their infamous rivalry lives on.” –Goodreads