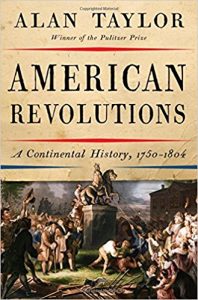 “Often wishfully understood as a high-minded, orderly
event, the American Revolution builds in this masterful
history like a ground fire overspreading Britain’s
mainland colonies, fueled by local conditions and resistant
to control. Emerging from the continental rivalries
of European empires and their native allies, the revolution
pivoted on western expansion as well as resistance
to new British taxes. In the seaboard cities, leading Patriots
mobilized popular support by summoning crowds to
harass opponents. Along the frontier, the war often featured
brutal guerrilla violence that persisted long after the
peace treaty. The discord smoldering within the fragile
new nation called forth a movement to consolidate power
in a Federal Constitution. But it was Jefferson’s expansive
“empire of liberty” that carried the Revolution forward,
propelling white settlement and slavery west, preparing
the ground for a new conflagration. This magisterial history
reveals the American Revolution in its time, free of
wishful hindsight.”– Goodreads