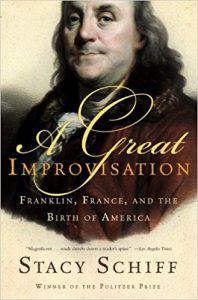 A Great Improvisation: Franklin, France, and the Birth of America by Stacy Schiff

“In December of 1776, a small boat delivered an old man to France.” So begins an enthralling narrative account of how Benjamin Franklin–seventy years old, without any diplomatic training, and possessed of the most rudimentary French–convinced France, an absolute monarchy, to underwrite America’s experiment in democracy.

When Franklin stepped onto French soil, he well understood he was embarking on the greatest gamble of his career. By virtue of fame, charisma, and ingenuity, Franklin outmaneuvered British spies, French informers, and hostile colleagues; engineered the Franco-American alliance of 1778; and helped to negotiate the peace of 1783. The eight-year French mission stands not only as Franklin’s most vital service to his country but as the most revealing of the man.

In A Great Improvisation, Stacy Schiff draws from new and little-known sources to illuminate the least-explored part of Franklin’s life. Here is an unfamiliar, unforgettable chapter of the Revolution, a rousing tale of American infighting, and the treacherous backroom dealings at Versailles that would propel George Washington from near decimation at Valley Forge to victory at Yorktown. From these pages emerges a particularly human and yet fiercely determined Founding Father, as well as a profound sense of how fragile, improvisational, and international was our country’s bid for independence.” –Goodreads