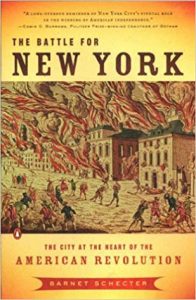 The Battle for New York: The City at the Heart of the American Revolution by Barnet Schechter

“The Battle for New York tells the story of how the city became the pivot on which the American Revolution turned: from the political and religious struggles of the 1760s and early ’70s that made the city a hotbed of political action to the campaign of 1776 that turned today’s five boroughs and Westchester County into a series of battlefields to the seven years of British occupation and martial law. The struggle for control of New York was by far the largest military venture of the Revolutionary War, involving almost every significant participant on both sides from General William Howe to Nathan Hale, Benedict Arnold to George Washington. Barnet Schecter brilliantly links eighteenth-century events with the city’s modern landscape, illuminating the forgotten battlefield that remains in our midst.”- Goodreads