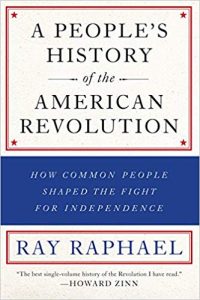 A People’s History of the American Revolution: How Common People Shaped the Fight for Independence by Ray Raphael

“A sweeping narrative of the wartime experience, A People’s History of the American Revolution is the first book to view the revolution through the eyes of common folk. Their stories have long been overlooked in the mythic telling of America’s founding, but are crucial to a comprehensive understanding of the fight for independence. Now, the experiences of farmers, laborers, rank and file soldiers, women, Native Americans, and African Americans — found in diaries, letters, memoirs and other long-ignored primary sources — create a gritty account of rebellion, filled with ideals and outrage, loss, sacrifice, and sometimes scurrilous acts…but always ringing with truth.” – Goodreads