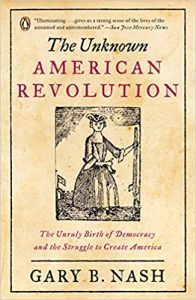 The Unknown American Revolution: The Unruly Birth of Democracy and the Struggle to Create America by Gary Nash

“The Founding Fathers may have lead the charge, but the energy to raise the revolt that culminated in the victory of the American Revolution emerged from all classes and races of American society. The Unknown American Revolution plunges us into the swirl of ideology, grievance, outrage, and hope that animated the Revolutionary decades.

It tells of the efforts of a wide variety of men and women who stepped forward amidst a discouraging, debilitating, but ultimately successful war to inscribe on a clean slate their ideas for the kind of America they hoped would emerge from the blood-soaked eight-year conflict.

Millennialist preachers and enslaved Africans, frontier mystics and dockside tars, disgruntled women and aggrieved Indians–all had their own fierce vision of what an independent America could and should be. According to Nash, the American Revolution was truly a people’s revolution, a civil war at home as well as an armed insurrection against colonial control.” – Goodreads