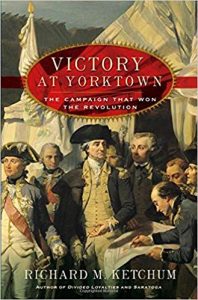 Victory at Yorktown: The Campaign that Won the Revolution by Richard Ketchum

“In 1780, during the Revolutionary War, George Washington’s army lay idle for want of supplies, food, and money. All hope seemed lost until a powerful French force landed at Newport in July. Then, under Washington’s directives, Nathanael Greene began a series of hit-and-run operations against the British. The damage the guerrilla fighters inflicted would help drive the enemy to Yorktown, where Greene and Lafayette would trap them before Washington and Rochambeau, supported by the French fleet, arrived to deliver the coup de grâce.

Richard M. Ketchum illuminates, for the first time, the strategies and heroic personalities-American and French-that led to the surprise victory, only the second major battle the Americans would win in almost seven horrific years. Relying on good fortune, daring, and sheer determination never to give up, American and French fighters-many of whom walked from Newport and New York to Virginia-brought about that rarest of military operations: a race against time and distance, on land and at sea. Ketchum brings to life the gripping and inspirational story of how the rebels defeated the world’s finest army against all odds.” – Goodreads