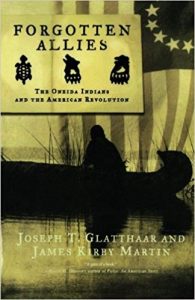 Forgotten Allies: The Oneida Indians and the American Revolution by Joseph Glatthaar

“Tribal, violent, riven with fierce and competing loyalties, the American Revolution as told through the Oneida Indians, the only Iroquois Nation to side with the rebels, shatters the old story of a contest of ideas punctuated by premodern set-piece warfare pitting patriotic colonists against British Redcoats. With new detail and historical sweep, Joseph T. Glatthaar and James Kirby Martin offer a vivid account of the Revolution’s forgotten heroes, the allies who risked their land, their culture, and their lives to join in a war that gave birth to a new nation at the expense of their own.

Not only capturing for the first time the full sacrifice of the Oneida in securing American independence, “Forgotten Allies “also provides details and insights into Oneida culture and how it was shaped, changed, and molded throughout many years of contact with the American colonists. Above all else, it depicts the valor and determination of an Indian nation that fought with all the resolve of the rebels only to be erased from America’s collective memory. A long-overdue corrective, “Forgotten Allies “makes certain that the Oneidas’ story is finally told.” – Goodreads