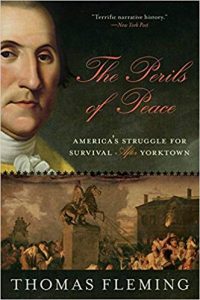 The Perils of Peace: America’s Struggle for Survival After Yorktown by Thomas Fleming

“On October 19, 1781, Great Britain’s best army surrendered to General George Washington at Yorktown. But the future of the 13 former colonies was far from clear. A 13,000 man British army still occupied New York City, and another 13,000 regulars and armed loyalists were scattered from Canada to Savannah, Georgia. Meanwhile, Congress had declined to a mere 24 members, and the national treasury was empty. The American army had not been paid for years and was on the brink of mutiny.

In Europe, America’s only ally, France, teetered on the verge of bankruptcy and was soon reeling from a disastrous naval defeat in the Caribbean. A stubborn George III dismissed Yorktown as a minor defeat and refused to yield an acre of “my dominions” in America. In Paris, Ambassador Benjamin Franklin confronted violent hostility to France among his fellow members of the American peace delegation.

In his riveting new book, Thomas Fleming moves elegantly between the key players in this drama and shows that the outcome we take for granted was far from certain. Not without anguish, General Washington resisted the urgings of many officers to seize power and held the angry army together until peace and independence arrived. With fresh research and masterful storytelling, Fleming breathes new life into this tumultuous but little known period in America’s history.” – Goodreads