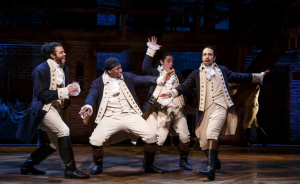 Public historians have spent a good deal of time looking at how history is performed in museums and living history sites, in reenactments, and on film and television. Theatre, opera, and musicals have received far less attention, and one reason for this might be that these forms of representation are often thought of as elitist.[1] As Lyra Monteiro points out in her review of Hamilton: An American Musical, the overwhelming majority of audiences for Broadway shows are white (and presumably well-off). This seems particularly ironic, given that Hamilton has been congratulated for challenging dominant white-centred narratives of the American past. My focus here, however, is not to engage with this specific representation of American history. Rather, I would like to briefly explore three points of engagement that public historians might find helpful in thinking about how theatrical performance brings, as Monteiro puts it, “history to life,” namely historical accuracy, ownership of the past, and historical distance.

Access the full article, courtesy of The National Council on Public History, here