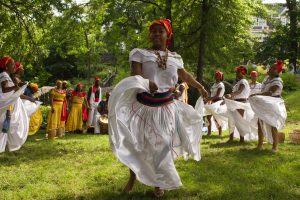 While the play has won overall acclaim, some magazines and news sites have criticized the play for its poetic ahistoricism. The New York Times, with the aid of influential historians, criticized the play for taking dramatic license with important historical facts. While biographer Ron Chernow has served as the historical consultant, it seems that the issue is more Miranda’s dramatic interpretation that than the factual foundation. Hamilton has been included within a recent historical trend called “Founders Chic,” a growing body of scholarship that celebrates the Founding Fathers for their intellectual and political foresight, creating the architecture of our modern political institutions. This differed from the previous reverence of the Founding Fathers as heroic men of virtue, who ultimately comprised an anachronistic pantheon of mythological figures. Vox’s Aja Romano wrote a lengthy piece explaining that Hamilton was a Pulitzer-prize worthy piece of fanfic.